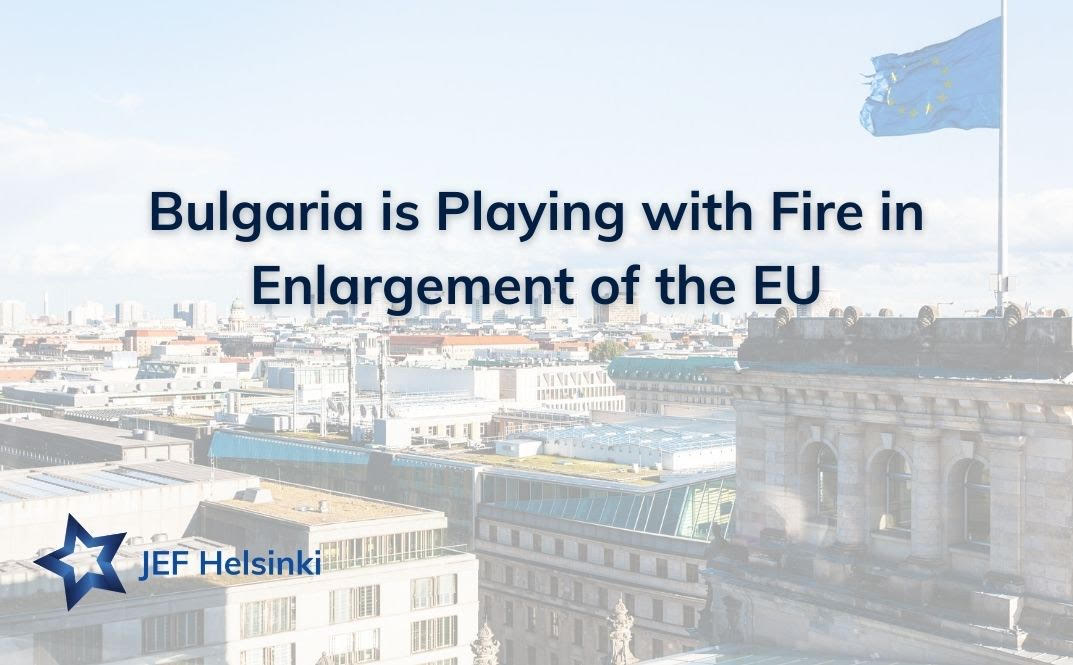 Bulgaria is playing with fire in enlargement of the EU

There have been a myriad of steps towards EU membership in the Balkan peninsula, and now, according to the European Commission, both Albania and North Macedonia have been ready for enlargement talks for longer than a year. However, there have been several obstacles on North Macedonia’s way to join the EU, many of which have seemed much less significant than they have actually been. A good example of these is the fight over its name, which used to be Macedonia, but luckily that problem exists no longer.

Nevertheless, after Greece lifted that obstacle, Bulgaria has put new ones. Also, those obstacles are very minor, as the most important of Bulgaria’s demands is that North Macedonia must recognize that Macedonian language has Bulgarian origin and thus is merely a dialect of it. In other words, like the other obstacles of Bulgaria, this one is mainly a question of identity. This is because the separation of language and dialect is determined by identity and politics.

These obstacles have nothing to do with issues that really matter in deciding whether a country is suitable for EU membership. For example, the language does not determine what kind of economic system or foreign policy the country has, nor does it offer any logical conclusion about the state of democracy, rule of law, human rights, or corruption. On the contrary, Bulgaria is playing an identity card that seems to be suppressing North Macedonian national identity as Bulgaria requires North Macedonia to admit its people’s Bulgarian roots, which seems more mocking than focusing on important questions. In addition, it has been believed that this demand is due to Bulgarian domestic politics as the prime minister had faced claims about ties with mafia, which means that North Macedonia has become a victim of Bulgaria’s politics. This refers to an even smaller real significance of this issue.

It must be noted that this kind of behaviour can have very drastic consequences and therefore it is very unwise. Firstly, providing an opportunity to join the European community gives more incentives to improve a country’s economy and governance. This would serve the people living in those countries as they would live in a country that’s regime is more based on the principles of democracy and human rights. For that reason, if the EU does not give any prospects for potential new member states, all that development can have much smaller chances to occur, which is now a risk in the case of North Macedonia. The example of Ukraine shows that we are talking about a real risk: one obstacle for Ukraine to solve its extremely severe corruption is that neither EU nor NATO has ever given convincing possibilities to join them, and thus Ukraine has not had enough reasons to improve its bad situation with corruption.

In addition, the EU cannot be naive and think that it is the only actor interested in the potential new members. Also, other countries such as Russia and China can be attractive in the eyes of those countries. This can happen especially if the EU is unable to give a clear message that membership is a possible future for them. In that case, neighbouring countries of the EU would not most likely see a development that would be pleasant to the EU as other world powers are less concerned about important values such as the rule of law, democracy, or human rights. Thus, it is not the EU’s interest to let countries willing to join the EU slip away to the hands of other actors. If that happened, the EU’s power in those regions would decrease. When all these risks are taken into account, we can raise a question: can the EU really afford playing with minor questions with such an important issue as enlargement?

In conclusion, Bulgaria is playing with fire. There is a risk of losing a lot of positive developments in the Balkan peninsula if the EU does not give any positive signals to potential new member states. Therefore, there is no need for minor obstacles such as Bulgaria’s examples, and the EU countries should forget such to avoid enormous costs.