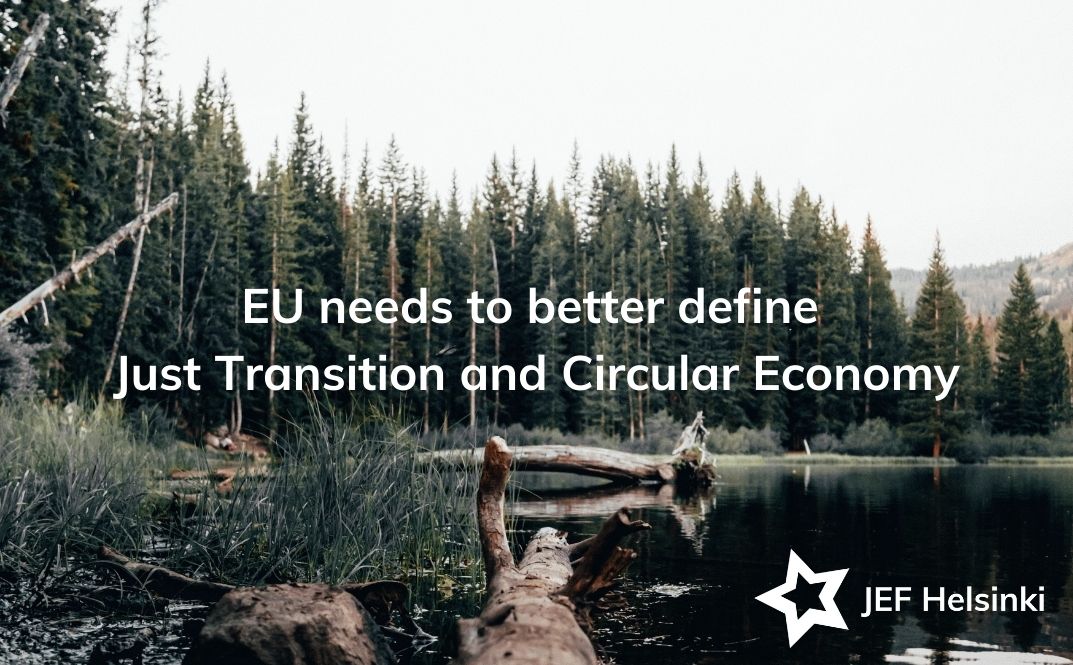 A more clear common vision must be created together. Now the EU’s strategies regarding climate action send mixed signals: the EU introduced the European Green Deal in 2019, but not making long overdue amendments to some policy areas that need it the most, such as the Common Agricultural Policy (CAP). While the EU has been talking about becoming the first “climate neutral” continent, most of the climate action has been reliant on member states national commitments. Without binding country-specific targets, the achievement of climate neutrality by mid-century will become impossible.

In 2020 the European Commission has drafted the European Climate Law, which legally binds member states to take action to be able to reach the collective goal of net zero greenhouse gas emissions by 2050. But is even legislation enough if the collective goals are set to be as late as they are? And is legislation enough if decision makers and those who hold power on different levels of governance are unwilling to act? Another issue is that the Proposal for EU Climate Law does not specify what it means by just transition (mentioned only 5 times in the 46 page document), which leaves considerable ambiguity and interpretation up to member states’ governments.

Circular economy: who defines what it means?

The EU is adamant on “greening” its industries. Industrial practices and overconsumption and extraction of natural resources cannot continue at the current rate. The concepts of Circular Economy and digitalisation are championed as pathways to a more resource-wise economy and a sharing economy. Circular economy is generally defined as a mode of production and consumption that is less reliant on extraction of new resources but instead aims to extend the life cycle of products through sharing, leasing, reusing, repairing, refurbishing and recycling existing materials and resources as long as possible. Focusing on Circular Economy aligns well with the principle of promoting the free flow of goods and services and common regulatory standards within the single market, which is important for the EU and at the core of its identity.

However, the discourse on “shifting into” Circular Economy doesn’t exactly specify and tell what it requires politically and what it is going to mean in terms of accessibility and ownership of the resources and resulting wealth (re)distribution. Will this mainly investment, industry and business -led discourse result in a necessary reduction in consumption and re-imagining of our economies, or does it justify continuing the extractive, short-term profits seeking business practices? Which circular economy initiatives are going to be emphasised? How is the transition transforming our relationship with property ownership because even everyday items will be rented? When we talk about the “sharing economy”, it is important to be aware that the term “sharing economy” encompasses a wide variety of very distinct ways of organising our lives around property within space at different scales. Do we talk about libraries or, to give an example, Airbnbs or new mobility-as-services initiatives? And which of these transitions are going to be funded by the public, and which by the private sector? These are some of the questions that member states have to consider in their national Circular Economy agendas as the EU seems to consider this as a depoliticised matter as long as member states promise to fulfil their environmental goals within thirty years.

Financial help for Just Transition is given to most affected regions, the total sum being €100 billion in total over the period 2021-2027. Most affected regions are defined by their high dependence on fossil fuel and carbon intensive industries, such as Katowice, an old mining town in Poland, and countries like Spain, Italy, Czech Republic, Romania and Lithuania. However, if the governments are reluctant to commit to these targets and the funding is denied on that basis, what can be done?

The Polish government has reluctantly promised to stop coal mining by 2049 but would until then keep its state-owned coal mining companies operating using state aid. Bailing out the coal industry does not reflect any commitment from current decision makers and is probably a sign to the EU that it should do more to make phasing out attractive and to create an even better mechanism to guarantee Just Transition happens.

It is imperative to rethink the values that guide our political decision making, as well as critically reflect what the current societal transformation towards sustainability means for human wellbeing and dimensions of socio-economic inequality. An integral part of achieving an economy that aligns with planetary boundaries is the social and labour policy aspect of retraining and helping workers in the fossil fuel industry to find other jobs, and the state to be able to adequately support people in this.

Limiting environmental policies and climate action to “environmental policies” does not reflect the deep societal commitment to adjusting our society and economy to respect planetary boundaries. Climate change policy discussions should not only involve climate scientists but increasingly often social policy and labour policy experts and researchers. Being aware of what we do to our environment and climate, and what the consequences of the policy the EU shapes is a fundamental democratical right. When advocating for a truly just Just Transition, the discourse should be more centred on justice and transformative support instead of leaving the past behind and going towards an unknown future.

Firstly, the EU should be more clear about its stance regarding environmental justice and how the countries share their responsibilities towards climate neutrality. This would limit the capability to simply outsource polluting industries in other member states or to countries outside the EU. In addition, the narrative regarding the path towards climate neutrality should be more justice centred, and not purely focused on greenhouse gas emissions reduced within the borders of EU member states.

Secondly, achieving a just transition and a truly circular economy requires specification and better communication on what they actually mean. The EU should not only set targets but also define how it is helping its member states to achieve them. Moreover, the EU must communicate clearly about the need to protect our ecosystems while providing a clear legislation for industries and member states to accept that environmental policies must always sustain, enhance or support biodiversity and local ecosystems.

Finally, due to the failure to enact environmentally sound policies at the national level in certain member states, the EU must emphasise cities and municipalities play an increasingly important role in encouraging action that is beneficial to the environment. Envisioning an ecologically harmonious utopia can be easier at the level of cities and municipalities. Therefore the EU should provide even better defined incentives for municipalities to show commitment to environmental justice, quit fossil fuels and sustain regenerative practices. More radical and more precisely targeted financial incentives from the EU would incentivise faster action and hopefully convince the governments to accelerate their delivery of climate promises. The EU is nothing without its member states, and it should be in everyone’s interest to pursue climate justice from a holistic perspective that truly leaves no one behind.