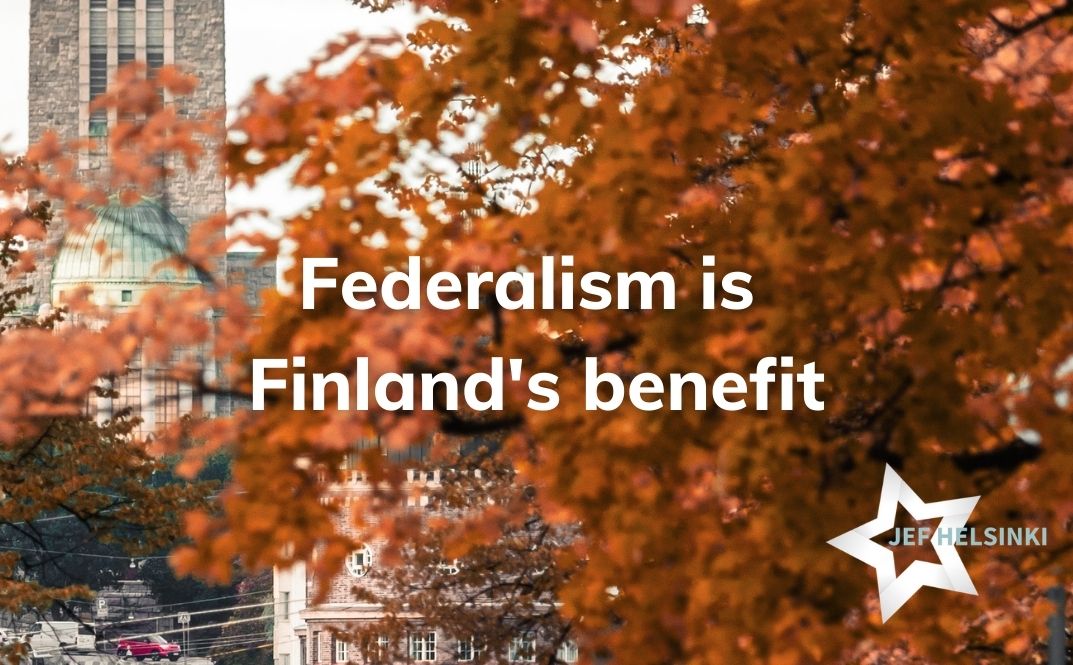 The COVID-19 pandemic and restrictions put in order to prevent the spreading of the virus have caused a global recession. For that reason, The European Council agreed on a very criticized recovery fund in June. One concern the critiques have had is increasing federalism that they see as a negative phenomenon.

Quite often the critiques of federalism forget what federalism actually means. An essential part of federalism is the idea that decisions are made as close to the citizens as possible. This principle is known as subsidiarity. For this reason, in a federation, there would be no problem that small decisions concerning a small area, such as one region or city, would not be done in the level of federation unless it would be necessary. Still, some issues including foreign policy and parts of financial and environmental policy would be done at the federation level, because it would be wise to do them there.

And this kind of federalism itself is not bad for Finland. Instead, Finland would gain more from a more federalist union than from the current European Union.

In the EU there has been a problem of unclear power-sharing. Currently, it is very confusing what power belongs to the EU and what to the member states. For example, what is the role of the EU in foreign policy? The EU has a common foreign policy, but member states still have their own interests that they try to achieve. One good example is the Libyan civil war, in which Italy is backing the UN-recognized government and France is supporting the so-called “Libyan National Army” led by Khalifa Haftar. Even though both of the countries have similar goals, a stable Libya, they try to achieve it in different ways.

It is also much more difficult to act in an unsure situation than in a situation where everyone knows their mission. Treaties haven’t solved the problem, but a federalist solution, a constitution, in which the power-sharing is made clear, would solve the problem.

This kind of constitution would be beneficial not only to Finland but also to every member state. In this case, it would always be clear for Finnish authorities what they should do and what they should leave to the EU.

In addition, federalism would mean more qualified majority decisions, which would also be an improvement in Finland’s point of view. The reason for this is that with qualified majority decisions there is no possibility of member states using vetoes or soloing when something important for the whole union is on the table. In this case, the union could renew itself much faster and more easily. For example, there has been a problem that the EU can punish neither Hungary nor Poland because they use vetoes in order to prevent punishing another country.

And how Finland would benefit from this?

With both proper constitution solving the problem of power-sharing and an increased number of qualified majority decisions, the EU would be a much more powerful, effective, and influential player. As a member of the EU, it’s better for Finland that a union is a member of can react to changes in the world like increasing immigration or climate change. In this situation, the union could act so that a flood of immigrants doesn’t become an enormous burden of one country, which could happen to Finland too like it was seen during the winter of 2015-2016. Also, a stronger union would be able to make sure more easily that all of the member states fulfill their climate goals compared to the current union.

A union that works together and functions more efficiently means that these issues have a less negative impact on Finland when Europe as a whole can react to them. This sort of union would also bring more power in international politics to Finland because such a union would have more muscles to act. Otherwise, Finland’s influence on world issues would be much smaller: one ought to keep in mind that Finland is a small nation with small power.

In conclusion, the critique of federalism doesn’t take into account all the benefits of federalism. Instead of only criticizing federalism, we ought to see what kind of benefits it could bring us. Because there are benefits - actually, a lot of them.